RFD (reduced function devices) are usually battery powered. WiSense nodes can be powered by a 3 volt coin cell (CR2032 for example). RFDs spend most of the time sleeping and wake up now and then (periodically or when triggered by an external event) to process information and communicate (if necessary). It is necessary to keep the node energy consumption to the minimum. Fortunately most devices (micros, radios , sensors etc) on the market today have one or more sleep modes with power consumption in microwatts. I measured the current consumption of the CC1101 based sensor node today. It is less than 5 microamps. The test setup has a coordinator node and one sensor node operating as an RFD  The RFD wakes up every 10 seconds and sends out a message to the external world (through the coordinator) conveying the node’s battery voltage, the output of the LM75B temperature sensor and the output of the TSL45315 light sensor. The whole node (micro, radio and the two sensors) is sleeping during the 10 second interval.  The RFD is powered by two AAA batteries. I used an HP multimeter to measure the node’s current consumption. This meter’s current resolution is 0.1 microamps. Power = current x voltage Power = 4.3 micro-amps x 3.1 V = 13.3 micro-watts In the pic below, the meter is reading 4.3 micro-amps while the node is sleeping.

If we use a 3 volts CR2032 coin cell (capacity 200 mAh) to power the node, how long will it last assuming 1 hour interval, 10 kbps on the air data rate, 71 byte packet length and 12.9 micro-watts power consumption (4.3 uA * 3 V)  in sleep mode ? CC1101 radio based WiSense nodes have a data  rate of 38.4 kbps. Let us assume 25 milliseconds for the node to wake up, query the sensors, transmit the packet and receive an acknowledgement. Let us assume that the radio, micro and sensors together consume on an average 35 mA when the node is active (sensing followed by data transmission and finally receiving the ack). Note that WiSense RFDs do not switch on the radio until the last moment. When querying the sensors the radio is still sleeping.  Note that sensors normally take some time (microsecs to millisecs) to sense and present data to the micro. During this time the micro is also put to sleep. The radio is only woken up right before transmission (actually when CSMA/CA is started).

As the duty cycle is reduced (say from once every hour to once every 2 hours), the second factor in the average power consumption result above will decrease from 0.73 to .365 micro-watts.

I have created a spec sheet for our new CC110 based wireless node (coordinator node and sensor node).

We are going to build around 20 nodes in the coming week.

866 MHz half-wave dipole antennas are pretty big (200 mm) and expensive (around $9 each). I am going to try quarter-wave antennas soon. We will also have an RF board variant with a U.FL connector (instead of an SMA connector). This will allow the node to be placed in an enclosure with only the antenna outside. The U.FL connector on the radio board will be hooked up to the antenna using a U.FL to SMA cable assembly.

We assembled two CC1101 RF boards.It took me a few days to get the the board working with the  MSP430G2955 controller board. I configured the CC1101 to operate at 866 MHz which is license free in India. I was able to do some range testing and I am really happy with the performance of the C1101. The range is far more than the CC2520 which operates at 2.4 GHz. I have added some pics of the module below. We will be adding this board to our store in a month or so. I still have bunch of things to do (including testing the C1101’s low power mode). I will also be doing extensive range testing – both line of sight and through walls.

The associated MAC still looks like 802.15.4. The CC1101 does not support automatic acks like the CC2520. I have modified the MAC code to send ACK when requested by the originator.

Here are some pics. 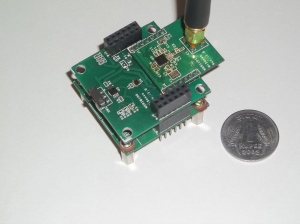