Any large community/campus in India usually has a network of water tanks to store and supply water. Community managers in Inda are very interested in knowing the water level in these tanks at all times thanks to erratic water supply (municipal or private tankers). One of our customers requires an SMS to be sent every time the water level in any tank goes above or below fixed threshold. They also want to have a history of the levels in every tank. This customer has tanks in multiple locations across the campus and most locations have multiple co-located tanks. One location has five tanks. Since It is not practical to have a GSM modem for each tank, we proposed a network of WiSense nodes in each location. The WiSense gateway node in each location will interface with a GSM modem. Locations which are close enough can also share a single GSM modem. This week we showed a POC using three WiSense nodes. Two were sensor nodes which used pressure sensors to continuously monitor the water level in two separate tanks. The third was a gateway node connected to a GSM modem. This sensor network was successfully able to track the water levels in both tanks. We configured the gateway node to send an SMS every 5 minutes to a campus manager’s cell phone. Each SMS reported the water level (in inches).

The sensor nodes were powered by two AAA batteries. Both nodes were configured to operate as reduced function devices (RFD). The water level sensing was done using the Freescale MP3V5050GP ported pressure sensor. A flexible food grade tube (tied to a weight) was lowered into each tank such that one end rested at the bottom of the tank. The other end was attached to the MP3V5050GP’s port. The sensor then measured the pressure of the water column.

Here are some pics of the POC. 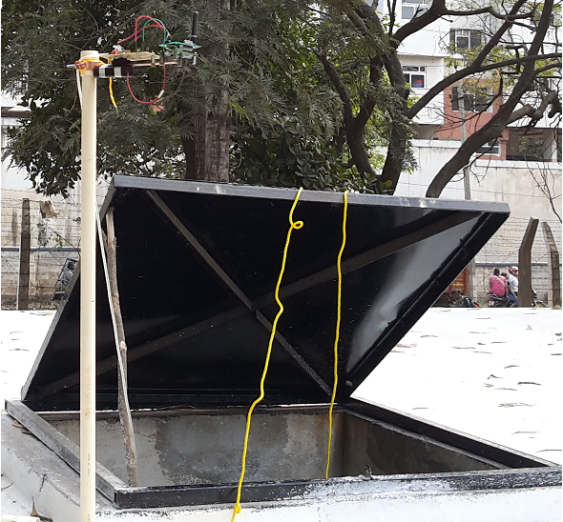 We are all aware of smart homes and smart cities. The Indian govt has also made some noise about building smart cities although anybody familiar with the chaos of Indian cities will find this laughable.

I am not sure if this concept of smart homes will take off in India. A lot of people seem to be working on smart phone controlled lights, fans, ACs etc. Not sure if there is a big market for this in India.

How about “smart communities”  where actual pain points are addressed by IOT and related technologies ? We have a lot of problems in Indian cities. Too many people chasing too few resources. We have too few livable cities for such a big population. Can we use IOT to mitigate these issues at the community level ? Smart communities will enable the smart city.

I live in a residential community of about 400 independent houses. Some of the major issues we face are water scarcity, load shedding (electricity), security etc. Suitable technology can help a community like ours tackle these issues and also make life more convenient.

Many of these issues are specific to countries such as India where good governance has never been a priority. Things are getting better but at a very slow pace.

We have realized that there are many use cases of a wireless mesh sensor/actuator network outside the home at the community level in India. We propose a community wide low power wireless mesh network which can be used to connect any device within the community. Let me give you some examples –

Home owners associations want to save the effort and money required to run communities effectively. Communities bring economies of scale.

Can we build an ecosystem of companies which can build products and services for communities in India ?

I have not paid much attention to the power consumption of a full function device (FFD) till now. A WiSense node configured to operate as an FFD keeps it’s radio on at all times since it has to participate in mesh routing. The CC1101 radio consumes around 19 mA (at 3 Volts) in receive mode. When transmitting, the CC1101 consumes around 30 mA. Further, the micro (MSP430) on an FFD node runs at 16 MHz consuming around 5.0 mA (Vcc at 3.0 V). As a result, FFDs cannot run on batteries for long.

In most scenarios, mains power is the only option. In applications where the mesh network is installed outdoors, it is possible to utilize solar cells to power FFDs. Assuming an FFD has to stay powered 24/7, let us calculate the daily energy consumption. Assume supply voltage is 3.0 Volts. Assuming maximum sizes PDUs (71 bytes on the air), a single transmission will take 15 milli-seconds (WiSense nodes transmit at 38.4 kbps). Let us also assume that this FFD does not have any sensors. Assume the FFD makes a maximum of Nt transmissions per day.

Assume this FFD makes a maximum of ‘Nt =1000’ transmissions per day and each transmission takes 15 milli-seconds.

To tide over consecutive bad weather days, we can choose a 1 W solar panel.

Interfacing a MaxBotics ultrasonic range sensor to a WiSense node

MAXBOTIX makes highly reliable ultrasonic range sensors. I have used them in the past for vehicle detection in covered parking lots. 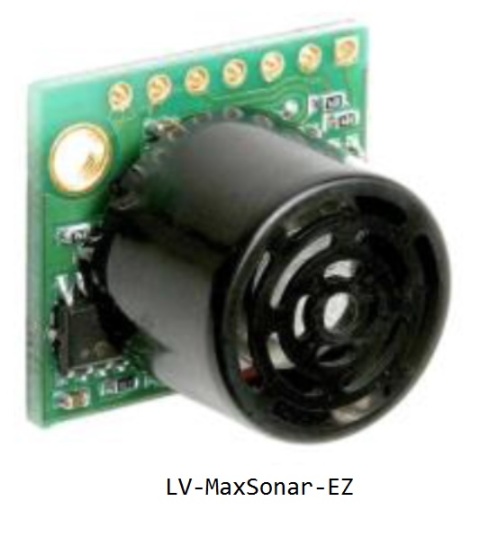 This sensor can output ranging data serially. The serial parameters are –

If the RX pin on the sensor is pulled high for at least 20 micro-seconds, it will trigger the sensor to perform a ranging operation. This will take around 49 milli-seconds.

I added an FFD app (ffd_app_wl.c) which periodically gets range data from this sensor and sends it to the external gateway app via the coordinator node. I used this app to measure the water level in the 1000 litre tank on the terrace.

The sensor driver is implemented in two files.

Here is the code from ffd_app_wl.c. 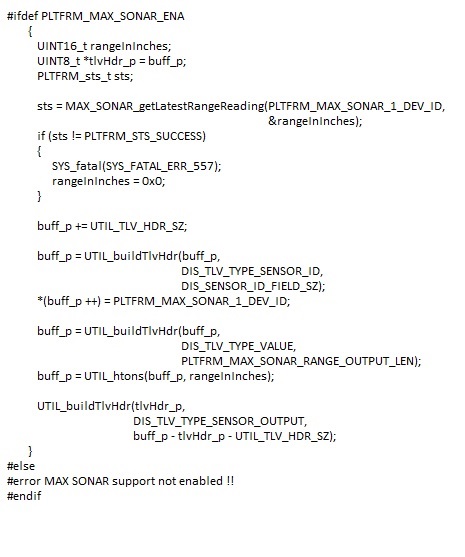 You can take a look at the code on bitbucket.

Here is a snapshot of the gateway app running on the laptop connected to the coordinator node. 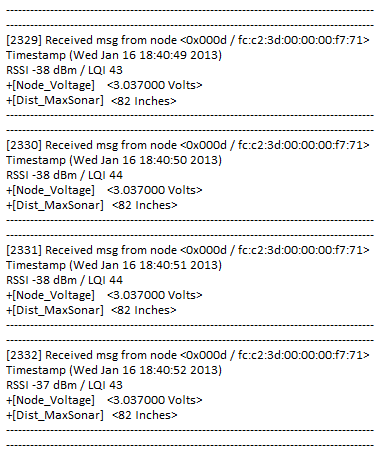 Some pics of  the test setup – 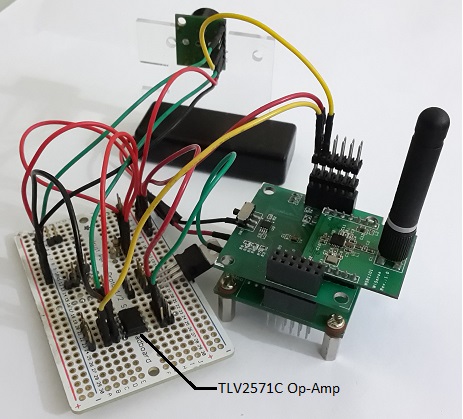 Interfacing a soil moisture sensor to a WiSense node

This post is about interfacing a low cost soil moisture sensor (the CHIRP plant water level alarm) to a WiSense node. This can help you automate plant watering. Wireless moisture sensors can periodically monitor the moisture level in the soil near the roots of plants and send this data (over a WiSense mesh network) to a Raspberry-Pi. The Raspberry-Pi can then use this data to remotely operate valves in pipes supplying water to your garden. If you don’t want to invest in valves, the Raspberry-Pi can send you an SMS in case a plant gets too dry. You can make it more sophisticated by combining the soil humidity informaton, local weather reports and plant specific data to decide when to water each plant.

I bought a CHIRP soil moisture sensor from Adafruit. This sensor is “open source hardware available under CERN Hardware Licence v.1.1”. The sensor utilizes capacitive humidity sensing instead of the usual resistive sensing (monitoring resistance between two galvanized nails buried in the soil near the roots). 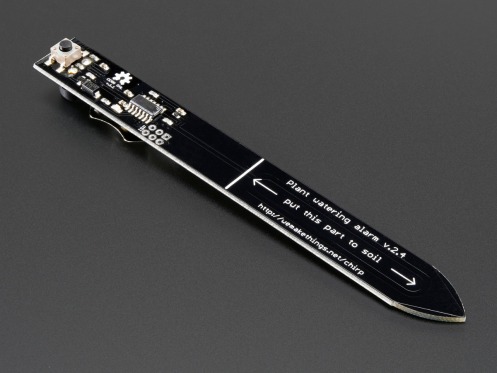 The “CHIRP” behaves as an I2C slave device (with 7 bit address 0x20). It is not that straight forward to use as compared to commercial sensor ICs from TI, ST, etc. It took me some effort to get it working. The sensor can work in two modes. One is the stand alone mode (default mode of operation) in which it will periodically monitor soil moisture and give out “chirps” when the moisture level indicates that the plant needs to be monitored. The other is the slave mode where it measures humidity/light only when requested by the I2C master node (a WiSense node in our case). The CHIRP can be put in the “slave” mode by resetting it (by toggling it’s reset pin) and sending any data to it (over I2C) right after resetting it. I had to read the description at “wemakethings.net/chirp/” and read the code in the repository to get it to work. Another problem was communicating with the “CHIRP” over I2C. WiSense platform has a “soft” I2C with support for 100 KHz bus speed. This driver (which has worked without issues with more than 30 different sensors) did not work as it is. I had to introduce extra delays in the driver to get it to work. The delay is introduced only when the macro “PLTFRM_CHIRP_PWLA_ENA” is enabled.

The “CHIRP” also measures ambient light using a diode and some analog jugglery.

After some hours of struggling with the I2C code, I was able to get the moisture level from the CHIRP (interfaced to a WiSense FFD node)  to my laptop connected to a WiSense coordinator. I tested the CHIRP’s output by watering the area near the sensor. The CHIRP responded immediately by sending an elevated value (indicating higher moisture content). I configured the WiSense FFD to send moisture data every couple of seconds to the gateway app running on the laptop.

All the code is in pltfrm/inc/chirp_pwla.h and pltfrm/src/chirp_pwla.c. The code has been checked in (to bitbucket.org). The app file “ffd_app_1.c” now supports this sensor.

Here is the code in ffd_app_1.c which calls the driver API to get the moisture level from the “CHIRP”.

You can see (below) the jump in moisture level reported by the the CHIRP is response to watering.

Here are some pics of the setup.

Interfacing a power relay to a WiSense node

I got a board with eight power relays from a friend. These relays (26-12-1CKE) are manufactured by O/E/N India in Bangalore.  The board has a relay driver IC (ULN2803A from TI). This IC can drive up to 8 relays. This IC  allows a low voltage GPIO pin to safely control an inductive load such as a power relay. The relays require 12 V supply.

I added a command “dioc” to the gateway application. This command can be used to set the output (on any node in an WiSense mesh network) of any pin (configured as digital out) to 0 or 1. This command takes 4 parameters.

The application payload format of the message sent to specified remote node is given below. This message requests the app layer on the intended recipient to set digital output P2.6 to 0. All messages exchanged between WiSense nodes and external entities such as the gateway app consist of a 1 byte DIS message type followed by one more TLV (type-length-value) structures. The type and length fields are single byte fields. All TLV related macros are defined in the file “dis/inc/dis.h”. In the message below, you can see one top level container TLV (DIS_TLV_TYPE_DIGITAL_IO) which in turn contains three simple TLVs (DIGITAL_IO_PORT, DIGITAL_IO_PIN and DIGITAL_IO_VAL).

The test setup had one coordinator node connected to a laptop running the small script shown below. The network had one more node (an FFD) with port p2.1 configured as digital output and hooked up to one of inputs of the ULN2803A  on the relay board. This script toggled the digital output p2.1 on the FFD (address 0x2) every second. The relay gated AC power to a CFL bulb.

The coordinator (and the laptop) were in one room and the FFD/relay/bulb were in another room.

Here’s a pic of the setup.