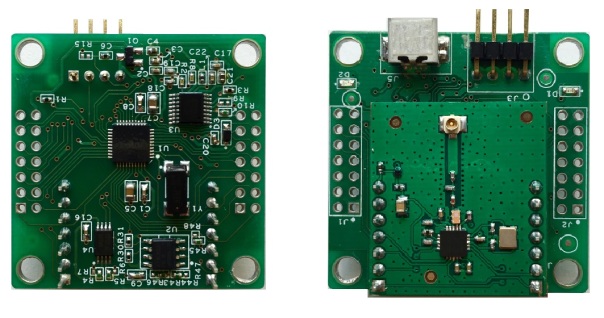 The WSN1101CL is a low profile WiSense wireless mesh coordinator node. It includes the CC1101 high performance sub-ghz radio (from TI) and the MSP430G2955 micro-controller (from TI).

The radio board has a U.FL antenna connector. We provide multiple antenna  options.

The WSN1101CL comprises of two PCBs. One PCB hosts the micro-controller while the other hosts the CC1101 radio. The micro board has a 128 Kilo-Byte serial EEPROM which can hold two complete firmware images. It also has another 256 byte EEPROM  which also provides a hardwired and globally unique 64 bit MAC addresses.

The  WSN1101CL  has  an on-board  USB Mini-B port which can be  used  to connect to a laptop or Linux SBC such as  the Raspberry PI. The USB  Mini-B port provides power and  serial connectivity.

The coordinator node is responsible for setting up and maintaining a single instance of  a  WiSense  LPWMN (low power wireless mesh network). It allocates a unique 16 bit address to each node which  joins the network.  It also serves as  the gateway for the entire network. All communication between the nodes in the  network and the outside world happens through the coordinator node.

WiSense provides a Linux/Cygwin based CLI to configure and query the WSN1101CL and associated  LPWMN (low power wireless mesh network).

The  Linux/Cygwin based CLI can be used (for example) to:

Posted on July 12, 2016, in Uncategorized. Bookmark the permalink. Leave a comment.